Winners of NESCAFÉ AZERA 2018: Taste of the City Design Competition

In cooperation with CZECHDESIGN, Nescafé company has announced a competition for illustrators and designers for the best design of Nescafé Azera coffee tin, which took place in April and May this year. More than 300 illustrators and graphic designers from 6 countries participated, but only one can win!

Expert jury consisting of Pavel Fuksa - grafic designer and art director in Czech republic, Ieva Ozola – illustrator working in Norway, and representatives of Nescafé and Czechdesign has met in May this year to declare the best design of the Nescafé Azera 2018: Taste of the city competition. Here are the best works, ranked in the Top 18! The design, inspired by the diversity of urban life and the evening panorama of the city that never sleeps, is another great work from designers from Czech republic. According to the jury, it was one of the best colour combinations, the best colour palette seen that day. “Somehow the reversed colour palette creates romantic environment and an illusion of a dream city and I really enjoy this.” they say. 2nd palce: and the absolute winner of the competition - Grand Designer: The Azera Square by Štěpánka Koutná and Tomáš Krčmář

Walking the streets and discovering your favourite taste from comfort of your home has never been easier, with the new design pattern for Azera tin by designer duo from Czech republic. They used the combination of the metallic effect and the matt perfectly, as well as they work very well with the incorporation of the Nescafe AZERA logo into the design, which the jury, together with a numerous beautiful details, appreciated the most and therefore decided to award the Grand Designer prize to this artwork.

„It’s the only artwork that actually uses the brand elements as a regular part of the design, compared to others which only place the elements on top of it.“ says Pavel Fuksa

„Everything from this design looks like specially made for this brand, even the small details like names of the streets or coffee ingredients. It works the best with this label, thats why this one is the most special one.“ adds Ieva Ozola. Experienced designer and illustrator comes up with a design inspired by the vibe of the vibrant city and its bizarre. Individual motifs reflect the diversity of city life associated with coffee drinking culture, evaluated by Ieva Ozola as „contemporary, really modern and really fresh compare to other ones because of its simplicity and a funky fun feeling representing the mood of the ‘taste of the city`.” The idea of this hand-painted illustration is to remind people that we all need coffee, not only night owls but also morning birds, in order to stay up like suricatas. The need for coffee is also presented by the addition of coffee in the watercolor colors the author used for the illustration.

„It represents young modern people, the real consumers of coffee.“ the jury says. „It was the addition of the coffee in the inks themselves that has created another layer of artistic meaning. ” adds Pavel Fuksa. The city, as well as the coffee, has a huge variety of flavours, it can be big, rough, playful, traditional, extravagant, disturbing but also peaceful. This is exactly what the author from Constantine the Philosopher University in Nitra attempts to combine in this illustration and what jury was most interested in.

“I really enjoy the artistic level in here because the illustrator has taken a huge number of steps in order to create this pattern, from markers, over pencils, ink pens and finish in photoshop, it’s an overwhelming piece of design.” says Pavel Fuksa. 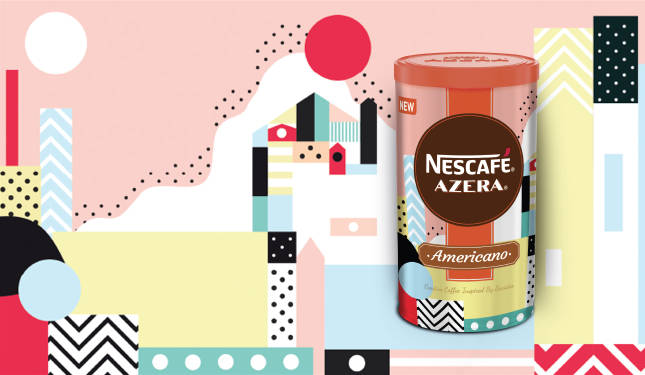 “Very clean very minimal and sort of Italian 50s approach with very limited colour palette and yet it brings a summery relaxing emotion.” says jury about this pattern designed by student from Tomas Bata University, Zlín.

The graphic design reminds of the city sunk by the sun, as well as it compares it to the perfection of coffee sunk by the water.
“These creamy ice cream colours are really delicious, and despite the illustrations being really simple, the linework and geometrical forms gives this pattern the movement of the city." both pavel and Ieva adds. 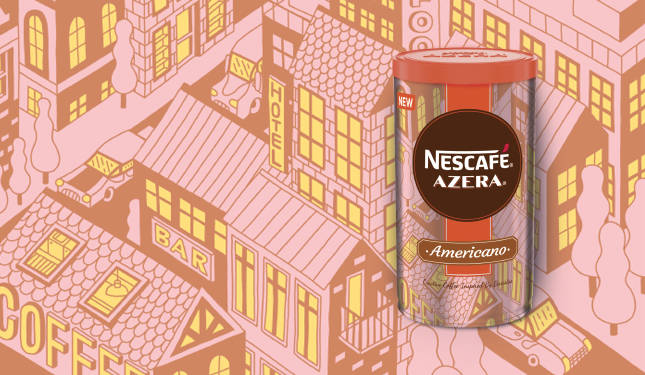 In the dark, yet pink. In the night, yet lighten. Designer from Denmark creating a feeling of citys night life, saying that even in the night, city could be alive, only if you drink some coffee.

“You can’t even tell whether it’s a night or a day, it’s just a city that you definitely want to visit and drink a cup of coffee in it."

"It definitely seems like the city never sleeps” add both members of the jury. The intention of the designer was to create a playful, livable city, yet with a bit of “aged” effects, as she believes that city’s true character comes from its past. Unisex colour palette was chosen in order to work in great harmony with colours of Nescafé.

Pavel and Ieva comments on the pattern with :“Simple colour palette, designer finds the way to play with house designs and gives each house a different look. To me, it represents different vibe of personalities, which makes it unique.” The design inspired by an unique piece of Copenhagen’s architecture - “snake bridge”. Apart from being very digital connected city, Copenhagen still manages to keep things physically connected as well. It is, above all, a city where people live and move together. Therefore, the design contains of three “bridges” moving together instead of one.

“The boldness and simplicity with a few lines creates a very striking image, connecting people, connecting city parts. It was a very interesting angle that designers have taken.” says both, Pavel and Ieva. The Best Part of the City by Emilia Voltti, zdroj: Czechdesign

1st palce: The Best Part of the City by Emilia Voltti

As the designer have lived in many cities in different countries, she noticed that every city has that one street, filled with live, laughter, and smell of fresh coffee, which was, according to her, the best part of every city.

“Both the description and concept are really matching for the brand and its really colourful and playful.” adds to the design Ieva Ozola. A place, when urban meets nature, Helsinki. The sea and the Nordic water, that can be harsh in winter, but gentle in summer. This city is above simple living and that is exactly what this design represents – the joy of coffee in the presence of your surroundings, says designer from Aalto University. Choice of colour was inspired by city’s numerous pastels coloured buildings and together with all elements used in the pattern it represents the tight knit relationship between this city and Nordic nature.

“The modern take on the classical pattern, the swans, water, coffee beans, they all creates an interesting timeless combination.” emphasis Pavel Fuksa. Inspired especially by the time of the year, when spring turns to summer, the designer wanted to capture the air of positive atmosphere in a city when first sun appears, as more and more people head outside, what is reflected in the colour palette as well. It’s bright, it’s youthful, it’s confident.

An art teacher, freelance artist and printmaker, designer of this patter, comments on her work saying the illustration portrays a metropolitan scene with a Scandinavian twist utilizing solid blocks with smoother clean geometric shapes.

“The playfulness, the strict geometrical shapes which are yet very emotional and immediately recognizable on the shelf are amazing.” adds Pavel Fuksa. Everything is about cycling in my city these days, from going to work, shopping, picking up children to deliver food and so on. This is primarily what the designer is trying to reflect in this patter, together with environmentally friendly aspects and positive effect on nature of cycling as the latest trend.

Almost a fairy tale, magical and dreamy illustration, with people wearing cups instead of their hats, it creates an unnatural magical moment in the hectic day, such as sipping a cup of coffee.

“It kind of reminds me of Alice in Wonderland, a modern version of the Mad Hatter being transformed into the cycling guy with a cup of coffee and Alice being represent by the girl with the bike, its dynamic, modern and playful.” compares Ieva. 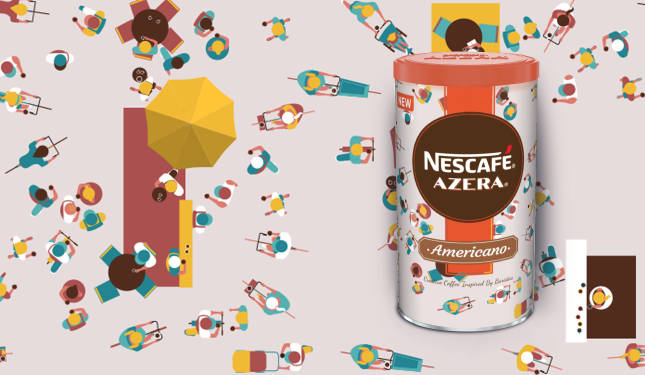 People and the urban environment. Pulsating around the squares and train stations. A river flowing from all directions. On foot, cycling, on their own, in a crowd, swarming. In all shapes and colours. That is what the designer sees in her work. Buzzing is all about people and their actions stirring up the space, people mixing up the city’s grey.

People and their movement direction in the design subtly point towards the Azera logo focusing attention to the brand, using design element on the tin as they would use boundaries of the public space.

“People illustrated from a completely different angle, observed from the exact top of view help creating city wild atmosphere on a weekend morning when people have enough free time to roam and sit around, have coffee. It is a beautiful moment that has been captured in this design.” says Pavel Fuksa The essence of the city lies in people in the streets of the city. Just sitting around with a cup of coffee and watching people go back and forth is what gave the designer the true `taste of the city’ and the right inspiration for this pattern.

“It almost feels like a festival in the city, people are going or talking, interacting with each other, having fun, having a great day. It has very nice dynamics.” says Ieva Ozola

“It is supposed to be a day but the choice of colour has made it elegant and exclusive sort of an artwork. Also it offers the viewer numerous opportunities to search for details and find his or hers favourite moment in it.” adds to the design Pavel Fuksa. People are always on the run – to work, school, lunch or date. Sitting around and see so many people moving was inspirational enough for author of this pattern. It represents an alley that is eternally full of people, a city full of movement, a country full of life.

“In this design, there is something that would definitely resonate with modern youth culture and millennials and people beyond them." “The kids were finally napping and I needed a break from work. I had a cup of coffee and looked out the window from my apartment in summery southern Stockholm. This is it.” says author of this pattern. This design reminds of a place when author want to spend her days and drink her coffee, with family, friends and pink cat.

“It is a piece of relaxing moment designed in a vintage French 60s illustration styles that we all know from French kid books and opening scenes of films, influenced from the French posters but at the same time it's kind of contemporary and modern.” both Pavel and Ieva unanimously agrees. When spring comes to the city and it gets all covered in anemones there is nothing better than to sit outside and drink coffee while listening to the seagulls. The city is both houses and nature.

“I wanted to interpret that feeling from my city and transform it into the design. By drawing the coffee-plant I aimed to make a strong connection to what it is all about - Coffee!” author presents her design.

“You really feel like the coffee is robbing from the city and the seagull gives you the feeling you are actually next to the sea and near the water, it gives both classical and antique feeling and time vintage look at the same.” says Ieva.

The competition was held between 26. 3. and 15.5. 2018. The jury had a hard work to chose 18 out of more then 300 designs. Thanks to everyone who participated. Congratulation to all designers! At least 6 designs will hit the shelfs in Autumn this year. 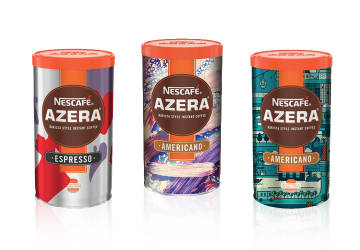 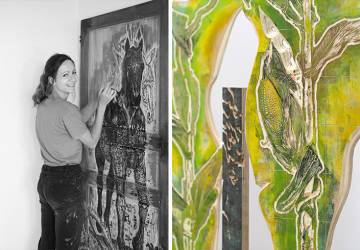 Used by Microsoft Advertising as a unique ID for visitors.